Witness the joy and ecstasy of a nation and its football team unite to write a new chapter in Greek mythology.

In the summer of 2004, audiences looked on in disbelief as the Greek National Football Team, a country that had never previously won a single match or even scored a goal in a major tournament, took down the giants of world football to become the unlikeliest of European Champions.

The architect behind this unprecedented triumph was legendary German football coach ‘King’ Otto Rehhagel. After accomplishing every major success in Germany, he made the bold decision to leave all he knew behind and work in a foreign country with the underachieving Greek National Team.

This is the story of how these two contrasting cultures came together to speak the same language and write a new chapter of Greek mythology.

**** [Four stars] "A real life Ted Lasso." LOS ANGELES TIMES
**** [Four stars] "You're guaranteed to be moved by King Otto... it's a truly compelling story." FILM INQUIRY
**** [Four stars] "It will play out as an underdog sports thriller for the ages... well worth your investment of time." EPOCH TIMES
"A great story - crisply told... entertaining." LOS ANGELES TIMES
**** [Four stars] "It makes you root for the protagonists, feel the pain of defeat, and rejoice in the glory of hard-won and well-deserved victories." CULTURE MIX
100% Fresh - Audience Score ROTTEN TOMATOES
"It's a beautiful, beautiful film." BBC NORTHAMPTON
**** [Four stars] "A thoughtful portrait." THE GUARDIAN
“A cracking tale.” METRO
“Heart warming and inspirational.” BEEN TO THE MOVIES
**** [Four Stars] “A majestic documentary that doesn’t waste a single second of its run time.” SCREEN ONE
“You’ll inevitably be grinning.” OPTUS SPORT
“A thoughtful portrait.” RICHARD HARTLEY
“Inspirational, whether you’re a football fan or not.” PETERBOROUGH TELEGRAPH
“The interviews with Otto Rehhagel himself are utterly fascinating" SCREEN ONE
“At a time the world needs a feel good story, the film King Otto recalls one of the all time great underdog miracles.” OPTUS SPORT
“A brilliant documentary that should not be missed." MAXIM MAGAZINE
"Top 10 TV and streaming tips for Friday." RTE
“Lively… one that should whet appetites for this year’s tournament.” THE TIMES
"An emotive and memorable film." CANBERRA TIMES
"This is a great story." RTE
"Sure to pluck at a few heartstrings." FILMINK
**** [Four Stars] JABBA’S MOVIES (SUNRISE AUSTRALIA)
**** [Four Stars] THE AUSTRALIAN
PICK OF THE DAY "Rehhagel makes an intriguing, onery subject in this affectionate profile." THE TELEGRAPH
"You don't have to be a soccer fan to enjoy this uplifting story." HURSTO'S FIVE MINUTE FILMS
**** [Four Stars] “Works a superb balance of comic relief and historical drama.” SYDNEY SCOOP
“Proves that even the most unlikely subject can, in the right hands, make for compelling drama.” THE AUSTRALIAN
“Irresistible… uplifting.” JOHN MCDONALD
“A terrific story.” ABC RADIO BRISBANE
“A sensational soccer saga.” JABBA’S MOVIES (SUNRISE AUSTRALIA)
“Told wonderfully by the stars who lived it.” OPTUS SPORT
"Infectious and endearing... joyous." MAKE THE SWITCH
"King Otto reminds me of why I love the sport of football so much." MAKE THE SWITCH
"What makes this documentary so uplifting is not just the spectacle of the underdog emerging on top but the union of two antithetical world views." FINANCIAL REVIEW AUSTRALIA
"Christopher André Marks’ irresistible documentary King Otto manages to confirm and confound every idea about the contrasts between the Greeks and the Germans." FINANCIAL REVIEW AUSTRALIA
"Full marks must be awarded to director Christopher Andre Marks for telling this real-life feel-good story so well and entertainingly." THE AUSTRALIAN 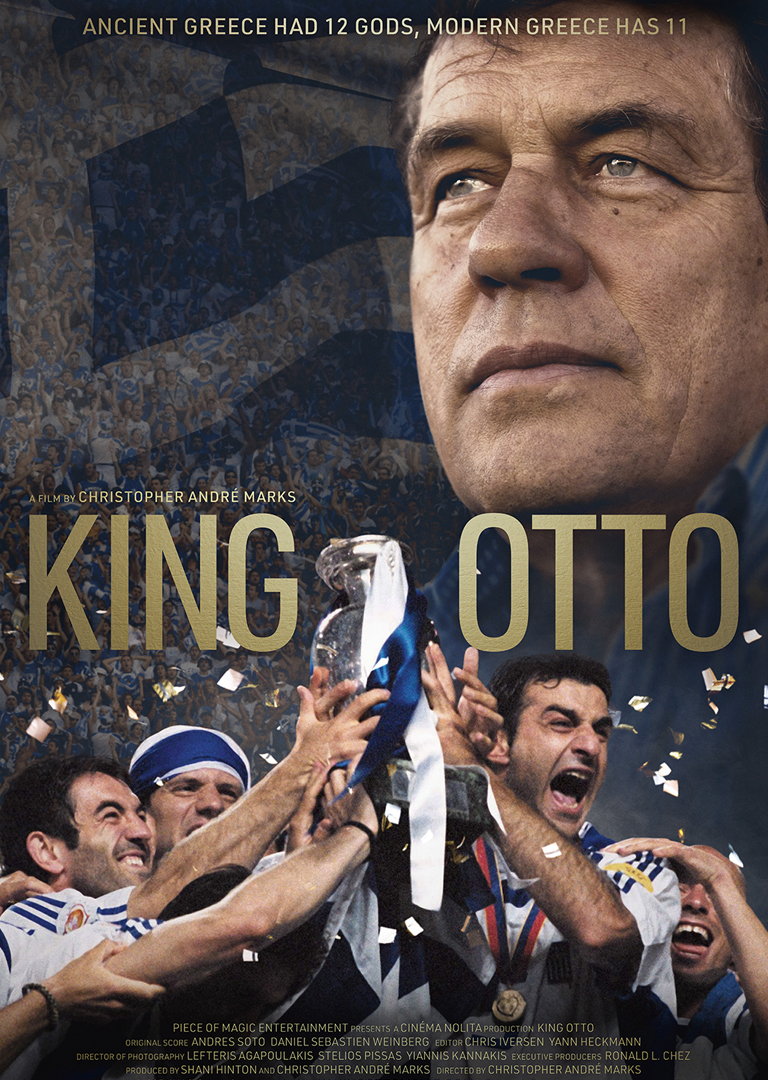