THE FIRE WITHIN: A REQUIEM FOR KATIA AND MAURICE KRAFFT

A feature-length documentary about the legendary French volcanologists, Maurice and Katia Krafft. A film by Werner Herzog.

At 3:18pm, on June 3rd 1991, a pyroclastic flow – a cloud of superheated gases and particles – descended at over 100mph from the peak of the volcano, consuming everything in its path.

It instantly killed Katia and Maurice Krafft, volcanologists and filmmakers from the Alsace region in France. They were too close. They were almost always too close. On the day before they died, Maurice said in an interview: “I am never afraid, because I’ve seen so many eruptions in 25 years that, even if I die tomorrow, I don’t care.”

The Kraffts left an archive of over 200 hours of footage, unprecedented in its spectacular and hypnotic beauty. Werner Herzog who had access to the entire archive, created a film that cannot be categorized. It is not a biography. It is a rather a requiem celebrating the legacy of Katia and Maurice Krafft.

"mesmerising" "sublime quality" "an absorbing watch" THE TELEGRAPH
***** [Five Stars] “Nothing quite like it has been seen on television before” THE DAILY MAIL
"More explosive than most blockbusters" THE GUARDIAN
"remarkable" THE INDEPENDENT
Pick Of The Week THE INDEPENDENT
Pick Of The Day THE OBSERVER
“Spectacular” THE OBSERVER
“beautiful and hypnotic” THE TIMES
"Werner Herzog’s film pays homage to the couple, using their footage as a testimony to the hypnotic appeal of erupting volcanos." THE I
“unprecedented in its spectacular and hypnotic beauty” THE BARBICAN PREVIEW
"Werner Herzog celebrates the formidable filmmaking talent of the volcanologists who died in 1991" LE MONDE
"spectacular" TÉLÉRAMA, FRANCE
"a contemplative and lively documentary, Werner Herzog recalls the extraordinary destiny of Katia & Maurice Krafft, volcanologists and talented image makers (...) A beautiful tribute to their fertile and contagious madness." TÉLÉRAMA, FRANCE
"Thirty years later, this film brings back to life their breath-taking images and pays tribute to this legendary couple.” LE ZAPPING DU PAF, FRANCE
"From the breathtaking archival images, Herzog has drawn a thread of evocative power: against the fury of the planet, Man cannot win.” L’ HUMANITÉ MAGAZINE, FRANCE
”Fountains of fire, rivers of lava, explosions, Werner Herzog has done a spectacular job of editing all carried by a magnificent soundtrack.” TÉLÉ 7 JOURS, FRANCE
"Werner Herzog is a master of filmmaking... plays as a stunning eulogy to the couple." INDIE VISIBLE 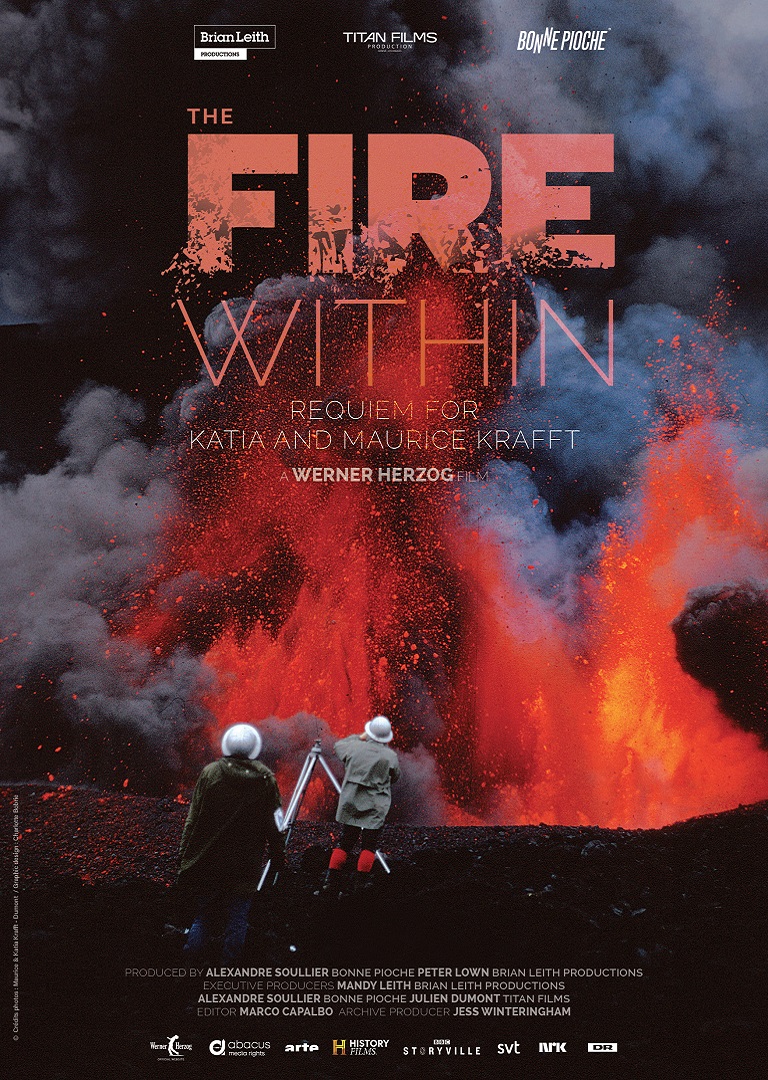 Please contact us if you have any questions or would like more information on THE FIRE WITHIN: A REQUIEM FOR KATIA AND MAURICE KRAFFT.

PETER O’TOOLE: ALONG THE SKY ROAD TO AQABA