Presenting new material and evidence never heard before, this film is the definitive story of Suge Knight and the murders of Biggie and Tupac.

Suge Knight the former CEO of legendary rap music label Death Row Records was recently sentenced to 28 years imprisonment for manslaughter and other violent crimes not typically associated with a highly successful record executive. This film takes a look at Death Row and how L.A.’s street gang culture had come to dominate its business workings. Artists such as Snoop Dogg were Crip affiliated, whereas Suge Knight and his team were all Bloods from the Mob Piru area of Compton. There was also the unholy and highly profitable alliance with Interscope Records, headed by Jimmy Irvine and Ted Fields, who’s office was just across the corridor from Death Row. Interscope would quietly ignore the beatings and gang violence that was regularly occurring just outside their door in the Beverly Hills building they shared.

When Tupac Shakur was in prison for sexual abuse, he was an artist signed with Interscope. But it was Suge Knight and Death Row Records, a subsidiary of Interscope, that would come to his rescue and offer Tupac a record deal in exchange for his freedom. This resulted in Tupac taking a gang allegiance with Mob Piru and with Suge Knight he fully embraced that world. The association with Mob Piru would end up being the cause of his death only 11 months later when Tupac was murdered in a drive by shooting.

The film also looks at the allegation of former LAPD detective Russel Poole that the reprisal killing of Biggie Smalls, a retaliation to the murder of Tupac, was commissioned by Suge Knight with the help of corrupt LAPD officers who were moonlighting at Death Row Records. These police officers were also members of Suge’s criminal gang the Mob Piru’s and with their resources helped orchestrate the hit on Biggie Smalls. The film produces new evidence and witnesses who actually saw these LAPD officers present on the night of Biggie’s murder, and who also testify that critical information had been deliberately withheld and concealed by the LAPD from the Biggie Smalls estate who had filed a $500 million-dollar lawsuit against them.

"Broomfield comes close to answering the questions — of guilt and recrimination — that have hung over these murders for too long". VARIETY
“Truly fascinating.” THE GUARDIAN
“One of my favourite documentaries to date, I cannot express the amazement I have with this film.” THE BIG BOB REPORT
“He’s [Broomfield] made an engaging, informative and at times truly shocking account of power, corruption and senseless violence.” THE JEWISH CHRONICLE
****[Four Stars] "Broomfield has done a fantastic job in re-telling this fascinating story.” THE JEWISH CHRONICLE
****[Four Stars] “A fascinating addition to the burgeoning subgenre of Tupac-related documentaries.” THE IRISH TIMES
"Pam Brooks serves as a resourceful gatherer of contacts and willing interviewees." FILM FEEDER
“Such an informative documentary.” THE BIG BOB REPORT
“Meticulous sourcing and selection of interviewees who tell the story better than any voice-over ever could.” THE BRITISH BLACKLIST
“The final full stop in the story of Smalls and Shakur’s unsolved murders.” THE BRITISH BLACKLIST
“Broomfield is such a skilled filmmaker… compelling.” THE TIMES
**** [Four Stars] THE GUARDIAN
“Compelling.” FLIP YOUR WIG
“Captivating.” NME
“Enthralling.” BACKSEAT MAFIA
“Acts as a fascinating companion piece to his 2002 film… an enjoyable and informative expansion pack.” BACKSEAT MAFIA
"A saga of larger-than-life events and personalities, with a built-in score. Admit it: you’d watch it." THE GUARDIAN
****[Four Stars] "A roller coaster ride of a very deadly music business." FILMUFORIA
“Broomfield’s knack for getting people to open up to him remains extraordinary.” TOTAL FILM
"[A] robust and authoritative storytelling style and professional sheen." SIGHT AND SOUND
**** [Four Stars] TOTAL FILM
**** [Four Stars] "Gripping." MOJO
“Broomfield has done a fantastic job in relaying this fascinating story.” FILM STORIES
“Engaging, informative and at times truly shocking.” FILM STORIES
"Nick Broomfield has another intriguing tale in his sights." HEY U GUYS
"Shocking and moving." TOTAL FILM
"One of Broomfield's best." MOJO
"A detailed portrait of Knight." EMPIRE
"Hard-hitting feature." HEY U GUYS
**** [Four Stars] FILM STORIES
"Broomfield has revisited the seedy world of gang rivalry and bent cops... prompted by new evidence about the killing of the world's most famous rappers." CHANNEL 4 NEWS
8/10 "The interviews furnish an intimate, terrifying portrait of the maelstrom Knight set whirling, and the lives it consumed." UNCUT MAGAZINE
"The doc may finally offer proof of a concrete link between the unsolved murders of the two music icons - and establish the alleged involvement of Knight in the death of Biggie." THE SUN 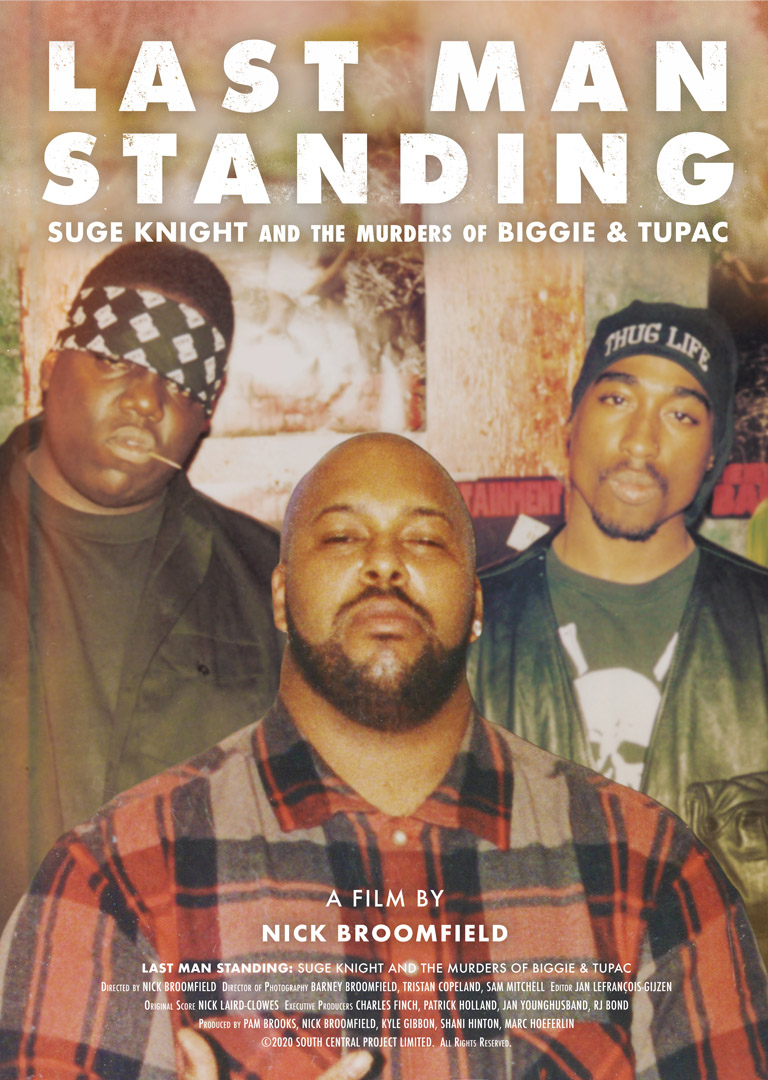 Please contact us if you have any questions or would like more information on LAST MAN STANDING: SUGE KNIGHT AND THE MURDERS OF BIGGIE & TUPAC.