An explosive story about the civil rights movement on the railroads that crossed America - from the award winning producers of Sort Of .

It’s 1921, the glory days of rail travel, and inside plush train cars that connect North America the passengers are made to feel like royalty. But for the Black porters who tend these floating palaces the work is backbreaking, low in pay, and without any hope of advancement.

It’s a job that grinds away at a man’s pride, and Junior Massey’s pride can only take so much. That’s why he’s running a small-time bootlegging business between Montreal and prohibition-era Chicago, right under the company’s nose.  Fellow porter and best friend Zeke Garrett, much more cautious by nature, continuously warns Junior to watch his step. It’s the same warning he gives Henry, a friend and fellow porter, whose interest in the activities of famous labour organiser A. Philip Randolph is about to be put into action. But when Henry is killed on the job due to disregard for the porters’ safety, it galvanises both Zeke and Junior to move – in opposite directions.  Zeke is galvanised to take on the work of improving the working conditions of the Porters, a burgeoning labour movement to win the same rights and wages given to white railroaders. But Junior distrusts his friend’s call to arms and looks to take his bootlegging sideline bigtime despite the massive risks. But at a time when Canada is backsliding into vicious Jim Crow-style segregation, and the US provides no better options, Black ambition of any kind is dangerous, and Junior and Zeke find themselves on a collision course with history – and with each other.

The Porter is a stirring, fast-paced exploration of Black empowerment and self-determination, offering a dramatic and compelling look at the lives of Porters, their families, and a community striving for success and equality.  From Montreal to Chicago, and every stop in between, The Porter is the story of a movement that gave birth to the first Black union in the world.

100% ON ROTTEN TOMATOES ROTTEN TOMATOES
"The year’s best-kept streaming secret." CHICAGO TRIBUNE
"[Alfre Woodard] is fantastic, funny and touching as Fay." CHICAGO TRIBUNE
"Seriously engaging." CHICAGO TRIBUNE
"Plenty of emotional authenticity." CHICAGO TRIBUNE
"[Mouna] Traoré excels." CHICAGO TRIBUNE
"Artfully sustained episodes." CHICAGO TRIBUNE
"The Porter pulls out laughter, anger, worry, and other emotions, and it is hard to pick a favorite character." DARK SKY LADY REVIEWS
"The settings are rich in color and style, so it is easy to watch and get lost in The Porter." DARK SKY LADY REVIEWS
"No shortage of fascinating characters." DARK SKY LADY REVIEWS
"Aml Ameen and Ronnie Rowe Jr. deliver riveting performances onscreen, breathing life into characters you laugh with and root for." DARK SKY LADY REVIEWS
"Grips audiences with a compelling story that does not stint on character." DARK SKY LADY REVIEWS
"Juicy, compelling." CHICAGO TRIBUNE
"Holy moly... robust... dazzling." NEW YORK TIMES
"The Porter has a refreshingly frank approach, and the performances are terrific across the board.” NEW YORK TIMES
"A must-see show for both Black history and humanity. It is rare to find a show the encapsulates both so richly and addictively." BLACK GIRL NERDS
"The entire series looks glamorous and is stylized to perfection." BLACK GIRL NERDS
"Has the costuming and sets to wrap you into its world." BLACK GIRL NERDS
"Transports you in style and truth." BLACK GIRL NERDS
"Delivers glamour, grime and equal rights." TV LINE
"Fascinating characters...epic scale." THE ROOT
"A gripping period piece." THE ROOT
"A captivating celebration of Black History." THE ROOT
"Great ensemble cast… a great drama." CANDID CINEMA
"Incredibly exciting television." CBC ARTS
"A revelation… vibrant characters and a rich setting." CBC ARTS
"The Porter is really, really good — on every level, from the passionate performances, flawless 1920s costume design, to the meticulous direction and inspired writing." REFINERY 29
"Refreshing… right on time and ahead of its time." REFINERY 29
"An ambitious, expansive drama... an eye for human drama." NOW TORONTO
"The acting is inspired." MONTREAL GAZETTE
"The Porter is a refreshing and invigorating series that finds rich fruit in the seeds of the past." THAT SHELF
"Watching The Porter, you feel like you’ve been transported to a whole different time period and is a real look at what life may have been like for Black people in North America in the 1920." SHIFTER MAGAZINE
"Charles Officer and R.T. Thorne did such an amazing job with the directing and the cinematography is stunning." SHIFTER MAGAZINE
"Oluniké Adeliyi is absolutely impressive… exuding strength, bravado and ruthlessness." SHIFTER MAGAZINE
"Complex characters and compelling story arcs... the ensemble cast is exceptionally good across the board." THAT SHELF
"The stories are powerfully conveyed. The plotting is intriguing." MONTREAL GAZETTE
"There isn’t a false note in it... the Porter is one sexy show. " THE GLOBE AND MAIL
"Artful drama... this series brings its story to crackling, contemporary life." NOW TORONTO
"Great TV; an eight-episode drama teeming with compelling characters." THE GLOBE AND MAIL
"Skillfully navigating various topics ranging from colorism to politics to classism, The Porter is a series that may take place in the 1920s but feels extremely relevant today." THAT SHELF
"Not simply a tale of hardship, but one of Black joy and liberation as well." THAT SHELF
"To say the series is groundbreaking is an understatement… [the creators] have raised the bar, pushed the envelop, and completely changed the game when it comes to Canadian television." SHIFTER MAGAZINE 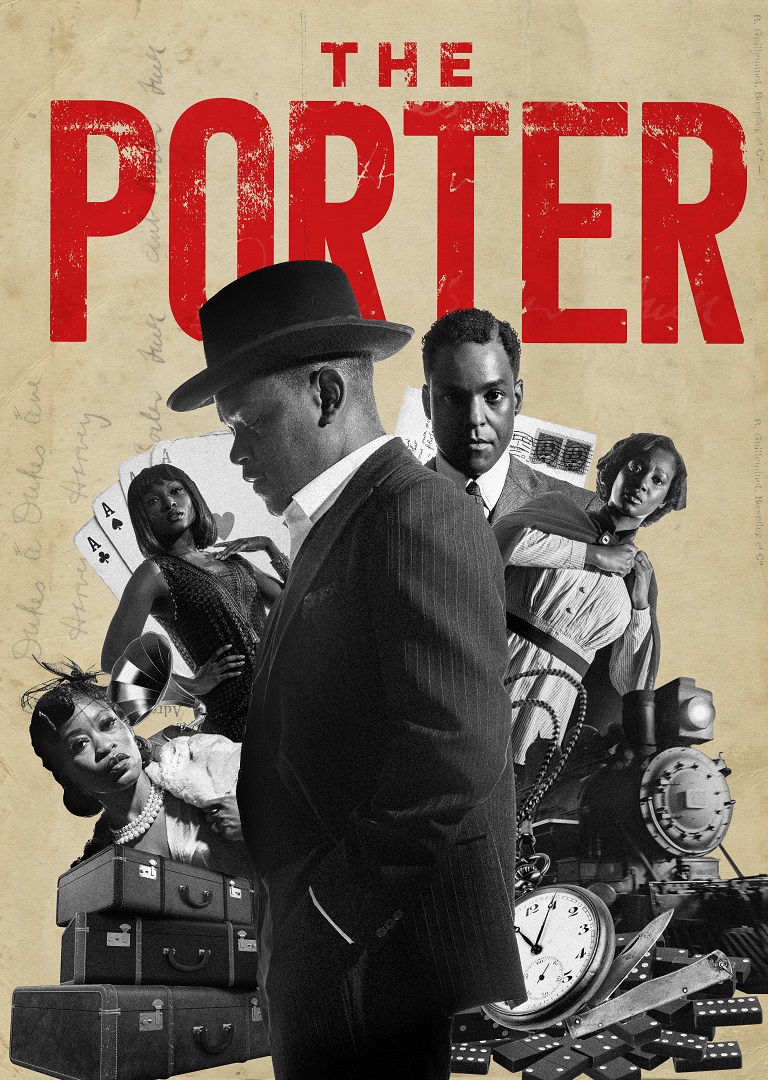